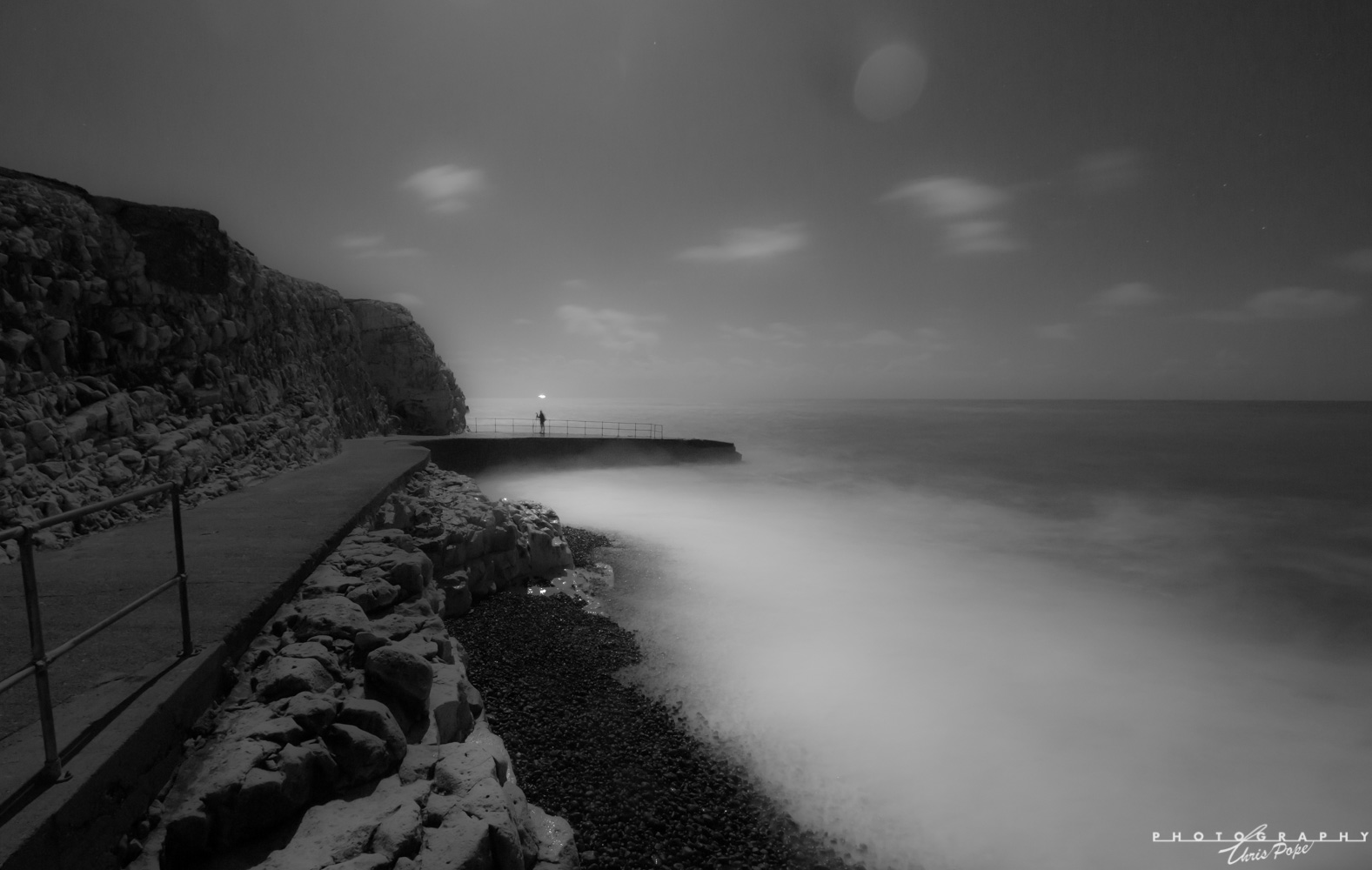 Almost as rare as a super moon itself, the diaries of a photographer friend and myself favourably aligned to facilitate a long overdue lunar photography adventure. After loading two lots of assorted camera kit into one car, we set off in changeable weather to see which of the target locations might offer us the best chance at capturing something of interest. After a minor curry diversion the weather had closed in a touch so we headed straight to the coast which was forecast to be clear until the early hours of the following morning.

The first thing that hit us on arrival was the lack of other photographers despite the clear skies. This was potentially explained by the second thing that hit us, a strong wind which felt as it was coming straight from the arctic. Wrapping our adventurous spirits up in suitably warm and waterproof clothing, we ventured out and made our way to a small breakwater and jetty, casting a careful eye on the angry seas hurling waves against the shore and onto the raised concrete path we were walking along. It was immediately obvious that any long exposure shots would face the additional challenges of keeping the camera still, even on a sturdy weighted tripod, as well as keeping the lens free from the seemingly all pervasive spray. Truth be told, there was also the need to keep an ever present eye on what the sea was doing … not close enough as James would find out later.

In terms of kit I was as ever using my trusty Canon 650 body with a Canon 10-22mm wide angle lens to get the optimum wide angle shot I was looking for. In situations like this, where the camera is mounted low and at an angle on my Sachtler Ace tripod, the tilt and swivel touchscreen comes into its own not just in terms of being able to frame the shot, but also to quickly navigate and edit the settings with cold, wet fingers. A few test shots to fine tune the technical settings and then my favourite part, looking for that creative and unusual angle that results in a genuinely interesting photograph.

As we got closer to midnight it was clear that the moon’s brightness was on one hand intensifying yet was also increasingly subject to serious fluctuations due to wispy, fast flowing cloud cover. Perhaps it was contemplating this and the impact this might have on his exposure settings that caused James to take his eye off the sea just as an unusually large wave broke over the quay side , duly soaking him in the process. No harm done as both James and his Olympus are weatherproof which is more than could be said of his trousers which I’m sure were steaming slightly on the way home courtesy of his heated car seats.

As ever, it’s one thing to quickly review your shots on camera’s LCD screen, it’s another to load everything up into Lightroom which is where you truly get to see the reality of your endeavours for the first time. And I have to say there were some gems in there – although as is often the case, not the ones I had anticipated from those initial previews on the camera. The above shot is my very favourite for a number of reasons, not least the emotional impact the photograph as a whole has on me as it captures both the result as well as the process of a long exposure shot. I love the composition with the strong lead-in line of the walkway shadow running from the bottom left corner, echoed and amplified not just by the railings but also variation in texture/materials – the grainy concrete, the smooth metal and the broken, uneven nature of the rocks. I also love the tonal and texture contrast between the soft whiteness of the breaking waves, the lumpy blackness of the shore. Thanks to the perspective in the shot, these also draw the eye to the subject in the centre left of the shot, which is James in silhouette working on one his own shots. A further visual draw is the tiny flash of light on the horizon directly above James, courtesy of a slow travelling ferry. The sky shows the motion of the intermittent clouds while also hinting at the super moon out of shot.

You can find a selection of other images from this shoot HERE.

Next article A walk in the woods